The Wasp is an insect belonging to the order Hymenoptera. 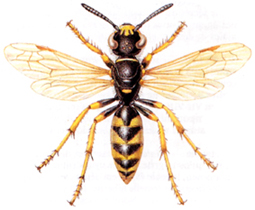 It is equipped with 4 wings (two Pairs).

An oral appliance that belongs to the family of lashing mills, which allows it to shred meat and other products, but also to make the famous "pulp", raw material of the nests.

It is also equipped with a retractable dart and usable at will.

In Hymenoptera, only females can sting. The males are devoid of sting, which is replaced by the reproductive system.

Unlike bees, the dart is not only a defense tool in wasps, it allows him to prick his prey to capture them.

The wasp will therefore prefer to move away rather than sting, unless it is attacked or if you stand too close to the nest.

The wasp is able to sting several times after the bee which can sting only once, expelling its pocket of venom, causing its death quickly.

The dose of venom injected by the wasp is 10 to 20 times less important than the bee, but remains painful.

For people with allergies, a single sting can have serious consequences.

The different attacks of wasps:

You may be the victim of an attack by a single individual. Either you tried to capture it or kill it without success. The insect will quickly answer you.

The second case is the approach of a nest. The least disturbing effect, such as the vibration of the ground at the approach of an underground nest, the cutting of a hedge, the pruning of a tree, the opening of a shutter, an electric meter, A change of tiles etc, can lead to an attack.

Girl Scouts will be the first to come out to intimidate you with a frantic flight around you. If you persist, the workers will attack in a very aggressive way.

A swarm can form and pursue you for several hundred meters and attack anyone nearby.

Especially do not undertake to destroy a nest without knowing the danger and without warning your entourage of the risks.

The life cycle of the wasp is one year for laying females and is carried out as follows:

Once the nest is built with some alveoli, the wasp (fertilized the previous year) lays its first eggs.

The wasp is then responsible for feeding the larvae, which will quickly pass to the stage of pupation.

Then we will become sterile workers in 2 to 3 weeks. These first workers (about a dozen) are then responsible for advancing the construction of the nest, additional slabs of alveoli and feeding the new eggs laid.

At this stage the development of the nest is exponential, which will double and then triple in a few weeks. 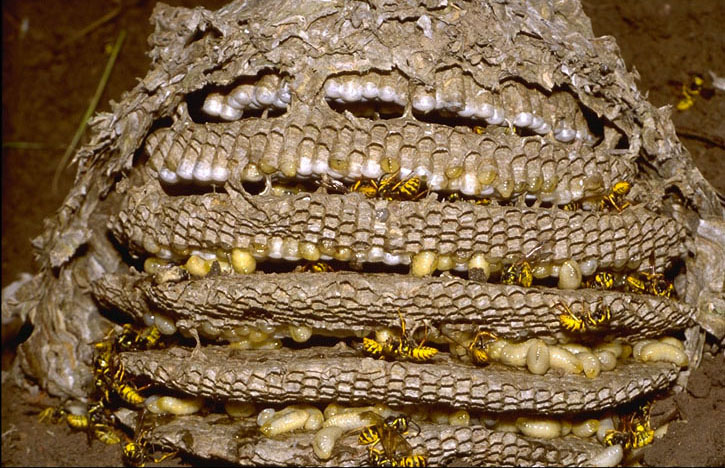 Almost 250,000 species listed worldwide. It is found on all continents.

Some species of wasps live alone, but a large part lives in colony.

The fascinating aspect of building insects is the rapid and complex manufacture of an efficient nesting structure.

Thanks to its buccal apparatus, the wasp conceives a "papier mâché" material of brown gray color. The latter is made of cellulose based on wood and bark.

The nests are always built to the maximum shelter from the rain and bad weather.

You can find a nest under the tiles in a garden shed, behind a window, between two partitions, in a child's toy outside, in a bush, in a fireplace, in a mailbox under Earth etc ... 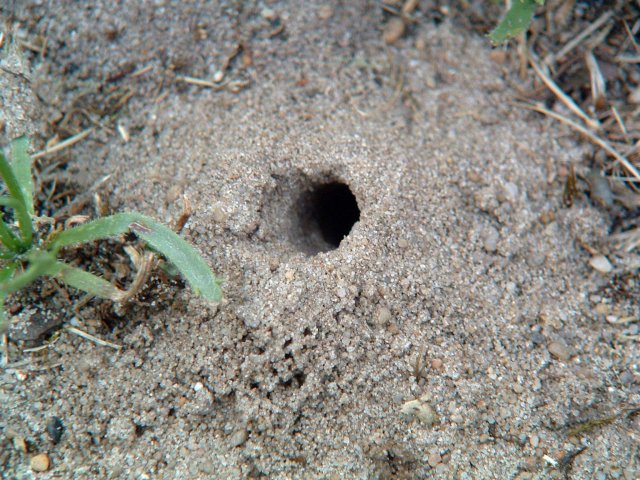 Regulation of the nest temperature :

The wasps developed several techniques in order to better control the ambient temperature of the nests.

First of all the wood fiber insulation can be made up of several successive layers leaving an air gap between each. Since air is the best insulator, this insulation technique works wonderfully.

If the temperature of the nest increases, then workers come to the entrance of the nest and flap their wings in order to circulate the air throughout the structure.

If the heat is heavy, workers can go for water droplets, which will be placed at the entrance, while using the technique of ventilation by flapping wings.

As the air cools in contact with the water, it then air-conditioning the complete nest of the colony.

At the end of summer the laying wasp gives fertile males and females day.

The females will then be fertilized and will ensure the creation of a new colony the following year.

At the first cold the fertilized females leave the nest, which lives its last days and will be emptied very quickly.

The fertilized wasps will spend the winter in the shelters (tree trunk, underground etc) and will make surface next spring.

The wasp Mason or called also wasps potter, is a wasp with a slender body and a very fine abdomen in its center.

Coming from North America, it has become very acclimatized to the Provence region.

She has the ability to build nests based on pellets of earth that she kneads with her saliva.

The mason wasp lays a single egg per cell. And will lay only a dozen eggs during his life.

Larvae are fed on caterpillars and paralyzed spiders.

Among other things, the jumping spider, well known in our region of southern France.

Mason wasps can sting you, but this is rare because it is not aggressive, unlike its cousins.

No items to display